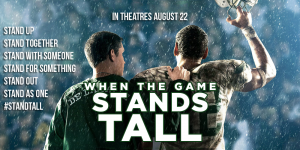 I don’t know if you’ve had a chance to see the movie “” but we saw it over the weekend. I’m a sucker for sports movies and have a high tolerance for any degree of cheese factor and most of them never fail to provide the cheese! I won’t specify for fear of calling out one of your favorites or exposing mine!

“When The Game Stands Tall” starring Jim Caviezel came on the screen and within a few minutes I could tell this movie was going to be a cut above. Never mind tagging it as a “Christian” movie. While the story line and the script repeatedly follow a faith-based ideal, it’s done in a believable way. In one scene, a member of the football team is with his girlfriend at a diner and when asked by one of the other players if they were . . . well . . . you know, his response was “No, we’re waiting. We took a purity pledge.” To which the other guy asked “Man, what cult are you in?” “Pleasant Hill Baptist Church!” he replied smiling.

It’s realistic and beautifully filmed and edited. The dialogue, while refreshingly void of the rampant obscenities that we’re led to believe are the norm in the teenage vocabulary, is really well written. There are believable lines delivered with believable teenage frustration, angst and intensity without the barrage of vocab-bombs. Maybe a lot of teenagers express themselves with the lowest of language denominators but I don’t want to pay $11 to hear it. Don’t want to hear it from adults either, for that matter.

I won’t go on and on. I’m not a movie critic but I’d encourage you to see it. When the ratings description on one movie website warns “smoking scenes” as one of the things to beware of, well, all things considered, that’s pretty mild. And, by the way, it only takes a matter of minutes for the filmmaker to show the consequences of the tobacco habit.

I can’t say whether you should take your kids or not. I don’t know you or your kids, but this movie has some terrific moments and some vivid life lessons that are well told.