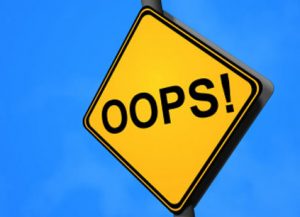 People love mistakes – as long as somebody else makes them.

My home church is in transition. What a useful word. It can be a hopeful word pointing toward refreshment, new visions and new accomplishments. But it can be a copout. I can’t tell you how many times I’ve heard the word “transition” applied to any of a number of situations that were simply in limbo. If no one is paying attention or addressing problems being in “transition” is a good way of putting things on the back burner.

Our senior pastor, a man who I have come to love and appreciate like few others I’ve ever known, retired in May. A couple of weeks later, he and his wife left for an extended trip to Europe. He gave lots of reasons for leaving the country. And the best one seemed to be his desire to get out of the way and make room for the new man and allow transition to take place.

We have a tremendous lineup of associates and they’re taking turns in the pulpit this summer. Last Sunday, one of our gifted and deeply insightful men was on point. I could tell when he came in the room early Sunday morning that something was a little off. He had that look of someone who hadn’t had a good night’s sleep, covered in the fog of a summer cold. At least that’s what we used to call it. Now, it’s a more sophisticated “respiratory distress.” It still stinks. And in this condition, he was supposed to preach at three different services.

At one point in the service, he led a reading where he, as the leader, read a sentence or two and the congregation responded. On the screens in the sanctuary, the assignments were clearly laid out with the leader reading the yellow lines and the congregation reading the white lines. About two or three slides into the presentation, he read the wrong line and, in response, some of the people in the seats read the other line and some of them read the line the leader had just read. It was as close as tongues of fire you’re ever gonna hear around our place.

And then a funny thing happened. I noticed the energy of the people participating dialed up considerably. Before the mistake, everybody was just following along . . . business as usual for a pretty common part of the worship service. But when things went sideways accompanied by a moment of mild panic and then a few laughs, concluding with a “Why don’t we try that again,” everybody joined in at a whole different level.

Someone said in a fervent prayer one day “Lord, let something happen that’s not in the bulletin.”

I’ve noticed at concerts, some of them my own and others where I’m in the audience, that people don’t seem to mind if there are problems. Sure, there are those rare occasions where an event will come off without a single flaw, but lots of times, there

are technical issues – a microphone will not work or a light cue is missed or somebody’s voice cracks or somebody forgets the lyrics (no names please!). And then the audience engages with new energy. It’s almost like they’re reminded that what’s happening in front of them is being carried on by real people, fallible humans subject to the same unpredictable bumps in the road as everybody else. And then there’s a new relationship between them.

I wouldn’t want mistakes to make regular appearances in the things I do but mistakes can pull us together and make us feel more connected. When they happen, we can acknowledge our common ground, the food chain or the ladder of ascent gets a little more fuzzy and less relevant, and we can relax and enjoy the ride.

I saw a news story this morning with the headline “Can we believe anything LeBron says about the future?”. Really . . . he can tell the future! Wow, that’s a news story! If you can, with any degree of certainty, tell the future, please call me now! 1-800- Wayne (not a real number!) I think there are too many exclamation points in this paragraph!!!

Probably won’t get any calls.

Enjoy the moments today. There will be mistakes. You’ll make them and so will every living, breathing being around you. I hope they’ll be innocent without collateral damage. If you see them in yourself and everybody else, just laugh and enjoy the botherhood.

One of my favorite passages in the Bible is this . . .

The Lord is compassionate and gracious, slow to anger, abounding in love. He will not always accuse, nor will he harbor his anger forever; he does not treat us as our sins deserve or repay us according to our iniquities. For as high as the heavens are above the earth, so great is his love for those who fear him; as far as the east is from the west, so far has he removed our transgressions from us. As a father has compassion on his children, so the Lord has compassion on those who fear him; for he knows how we are formed, he remembers that we are dust. (Psalms 103:8-14 NIV)