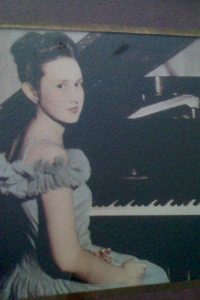 The Soul of a Community

Small towns know how to rally. My Mom passed away on a Tuesday and the network of dear, long-time friends and “neighbors” in the truest sense of the word, spun into action and did everything that needed to be done and more.

Our little town, in the northeastern corner of Louisiana, has seen some decline over the last couple of decades. On every recent visit, I’ve noticed something else changed or suffering from neglect.

The house I grew up in needs some serious yard work. We hope to get up there this fall to watch my niece cheerlead for her high school team, and do some cutting in the yard I once played in. Back then, the yard seemed huge. Now the vegetation is having its way with my old playground. A few hours of trimming and clearing might just do the trick and it’ll provide us with one heck of a bonfire.

Fewer businesses are still open on main-street where my dad’s insurance office once stood. There used to be a bank a few doors down from dad, a pharmacy in the other direction, a dime store, a feed store, a hardware store around the corner, a “dry goods” store that sold shoes, jeans and underwear, and a TV repair shop. Mr. Calhoun still actually fixes televisions but has moved his shop closer to home.

I suppose the greatest blow came when the state (or the parish . . . not sure who makes these kinds of calls) closed both the elementary and the high schools. The old elementary school building is about a three wood from my house, the high school, maybe a pitching wedge.

The elementary school building, where I attended first through seventh grade, has been condemned for several years. I guess there’s no money to knock it down. It’s beginning to be over-grown with vines but every time I drive by, I can’t ignore the flood of memories from the years I spent there.

The old high school building has been converted into a community center and, I hear, all kinds of events take place in the gym. I walked in there a couple of months ago to find the hallways, where classrooms stood, permanently walled off. The gym is the only part of the building still being used. The hand-painted bulldog mascot still occupies the center spot on the basketball floor.

But when a town loses its schools, it deals a serious blow to the prospect of new families moving in. Most of the people that live there have been there a long time. Some are second, third or fourth generation residents and have found plenty of good reasons to stay and call it home.

But with all the economic, social and cultural changes that have found their way to my hometown, it still possesses a charm that might be difficult to explain to outsiders. It would be easy to blow through town and never catch sight of it.

The visitation (some would call a wake) took place on Thursday night after mom passed on Tuesday. The ladies and gentlemen of the church made it clear, “Don’t you worry about a thing.” They served dinner (we always called it “super” and I don’t remember when the word-change took place) while nearly two hundred people came by to pay their respects to my mother, this graceful lady that touched so many lives.

Remember, this is a woman that spent her last three years in a nursing home – a little ways removed from the normal traffic of even a small town. Those that came by on Thursday night included a dwindling number of her peers along with children and grandchildren of her peers.

There was lunch for all our family at noon before the two o’clock funeral service provided by the ladies of the church as well as desert and coffee after the brief cemetery service. Not just groceries, this was sustenance given in love, with few words spoken, few words needed.

Take the school away, close businesses and watch more of the houses fall into disrepair and what you have left is the authentic soul of a town – the people that make a community a real “community.” The buildings are not the soul, the economic heartbeat, as important as it might be, is not the soul, the school is not the soul. The people, with a keen understanding of God’s grace and mercy, with a daily awareness of His presence and with a commitment to being His hands on the earth – that is the real soul of a place. And that soul lives and thrives – the heartbeat is strong in my hometown.

A little over a week after laying her to rest, as you would expect, I’m slowly coming to the realization that she’s really gone. Yes, I picked up the phone to call the other day. A simple phone call would bring my mom a lot of happiness. She loved to talk. And I kind of miss the weekly email from Amazon saying “Thank you for your order” as she worked her way through one book after another on her Kindle.

One of the hardest things for me to deal with right now is getting back into harmony with the urgency of this life. I listen to the radio or try and watch some mindless television show and I’m amazed at the insignificant minutia some call important. Sports radio hosts are all worked up over the latest trade or the NFL season opener and political pundits continue their war of words over a truckload of all-so-important issues. I don’t think my mom is concerned over who occupies the White House anymore, but I know this . . . I’m going to try put a better filter between the important and the not-so and maybe get less worked up over everything in general.

My wife was preparing for the students to come back to school and we went shopping for supplies a few days ago. The late-afternoon sky was beautiful that day as I walked to the car carrying a box of copy paper. I looked up and thought (and this is not an official, verifiable theological position) “Hmm, my mom is up there somewhere, wherever heaven is, in whatever dimension it exists, free, no pain, unrestrained by the limitation of a mortal body and I’m buying copy paper. Who got the better end of this deal?”

After a life well-lived, leaving her mark on the world around her with honor and dignity, she is not (as some might think) getting what she deserves. She would be the first to tell you that none of us deserve a heavenly eternity, but by the grace of God, the free gift He gave, we receive it and lay all the crowns at His feet.