My dear Mom passed away last night around 9 PM. One more of the greatest generation has slipped away. They weren’t given that title casually. It fits. She was a great lady.

Mom was 88 years old and has dealt with lots of annoying physical ailments for years. Three and a half years ago, she moved into the nursing home a quarter of a mile from my childhood home. She left the house she’d lived in for 50-plus years willingly. Living alone in the house had become lonely and, at night from time to time, she would hear noises and that would make her nervous. Every now and then, she’d fall and would have to wait for someone to come and help her up. So the nursing home provided a safe place, a place where there was an abundance of friends and caregivers that interacted with her every day.

She quickly became a favorite around the home. Before much time had passed, she established a small library (she loved to read) and encouraged everyone to check out books and enjoy the variety of materials. Mom diligently proofed all the reading material to make sure there were none of “those words” in the text.

We gave her a Kindle a couple of Christmases ago, not knowing if she’d take to the new fangled gadget or not. She loved it even though the little tiny buttons frustrated her. A the time, there wasn’t a wireless network in the nursing home so she’d roll her wheelchair to the end of the hall facing the First Baptist Church (They had wireless . . . and it was powerful!) and tap into their network. I had her on my Amazon account and about once a week, I’d get an email from Amazon thanking me for my order.

She taught Sunday School, studied all week to teach and was always excited to see who would come to class – even though more than a few would sleep through the lesson. Sunday, August 12, two days before she died, she asked me “Who’s teaching my class today?”

She played piano for some of the functions at the nursing home even though her fingers were seriously bent from arthritis. I bet she still didn’t make many mistakes.

I suppose I got my music from my mother. And, possibility, any sense of humor. She was very sharp and funny to the very end.

Sunday, August 5, she was admitted to the hospital having lost use of her hands and feet. Her kidneys were failing.

She was firm in her decision to not have dialysis. She was just too frail to make the trips to have the treatment and didn’t want to live that life. The doctors told us that without dialysis, she wouldn’t have a chance. So, we convinced her to try three treatments in the hopes that her kidneys would kick-start. It was a long shot, but she agreed.

Wednesday and Thursday, she endured the dialysis. Exhausted, an hour into the Friday round, she told them “Stop. I can’t do this.”

We made plans for hospice to take over on Sunday and the clock started.

Sunday afternoon, lots of family began to gather with her more consistently than was allowed in the ICU.

Even as I’m writing this, the little things she said to me don’t really translate well to the printed page. They seem insignificant and pale. But as I counted the days – and we had no idea how many we had left – the brief dialogues were and will always be priceless to me.

All week long, a clouded mind giving way to clarity, she would say to me, “Let me go, I want to go.”

One day late last week, she told me – and I don’t know which mind this was, cloudy, clear or visionary – “I saw your daddy through the window.” “How did he look,” I asked. “Oh, he is young and his hair is dark and wavy . . . he’s so handsome,” she said with a smile.

Sunday before her last Tuesday, she pulled the oxygen mask down off her face enough to ask me, “How did I get this sick?” I told her the saga of the past week and her response was, “Well, if my kidneys aren’t working, I’m not gonna make it.” I raised my eyebrows a little and nodded. She asked, “How long do I have . . . hours?”
I said, “You’ve got as long as you want, Mom.” A few seconds passed, she pulled the mask down again and asked me, “Have you ever watched anybody die?” “No,” I said.
“I have” she replied. Another few seconds passed and she whispered, “It takes a while to die.”

From there, it took a little more than 24 hours.

She fought to breathe that last day with all the effort of a marathon runner at the finish line. Her face was growing more and more red and the veins on her temples were standing out. After her last breath, her face was as sweet and clear as a porcelain doll. Race over. Winner.

What a fascinating life is this life. The flesh was formed of the dust of the earth and the earth is all it knows. It fights with all it has to stay in the dirt. The spirit knows the future and knows its destiny. The One that formed us calls out to the spirit to break out. One of our friends visiting the hospital shared a quote (origin unknown to me) that went something like this: The spirit exits the body like a schoolboy on the last day of class . . . with great joy and abandon! 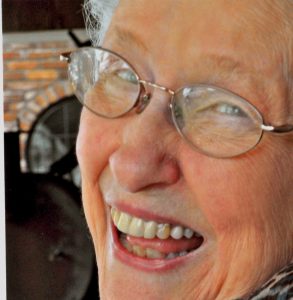 And so she did.

Posted in Blog
← FarewellThe Soul of a Community →